Ancient humans lived off giant mole rats high in the mountains of Ethiopia to survive the last ice age, a new study finds.

View of the Fincha Habera rock shelter in the Bale Mountains in Ethiopia, which served as a residential site of Middle Stone Age foragers. (Image credit: Götz Ossendorf)

Ancient humans lived off giant mole rats high in the mountains of Ethiopia to survive the last ice age, a new study finds.

Previous research had suggested that high-altitude regions such as Tibet and the Andes were among the last places peopled by humans. The air is low in oxygen, resources are scarce and the weather can get harsh.

However, in increasing numbers, archaeological finds in high places across the globe have recently begun showing that humans might have colonized high altitudes earlier than previously thought. For example, a jawbone unearthed in a holy cave in China reveals that an extinct, mysterious human lineage known as the Denisovans made its way to the high Tibetan Plateau as early as 160,000 years ago. Still, although those findings suggested the presence of humans in these areas, they said little as to whether people actually dwelled there.

Now, scientists working in Ethiopia have uncovered what they said is the earliest evidence to date of prehistoric mountaineers, ones who made a home at great heights during the last ice age more than 30,000 years ago.

“The most exciting finding is the fact that prehistoric people repeatedly, over millennia, spent considerable amounts of time in high altitudes at a residential site and actively, deliberately made use of the available Afro-alpine resources,” study co-author Götz Ossendorf, an archaeologist at the University of Cologne in Germany, told Live Science.

In the new study, researchers trekked on foot and by pack horse up to a rocky outcrop near the settlement of Fincha Habera in the Bale Mountains in southern Ethiopia, which is located about 11,380 feet (3,469 meters) above sea level. Previous research had uncovered the site more or less by chance, study co-author Bruno Glaser, a soil scientist at Martin Luther University of Halle-Wittenberg in Germany, told Live Science.

Reaching up to nearly 14,400 feet (4,400 m) above sea level, the Bale Mountains are rather inhospitable — the air is thin, temperatures fluctuate sharply and it rains often. As such, it was previously assumed that humans settled in this area only very recently and for brief spans of time, Glaser said.

The scientists unearthed numerous signs — such as stone artifacts, burnt animal bones, clay fragments and a glass bead — that the rocky outcrop was once inhabited. To find out more about the site, they analyzed sediment deposited in the soil there to date its age and glean details about how the people there lived. 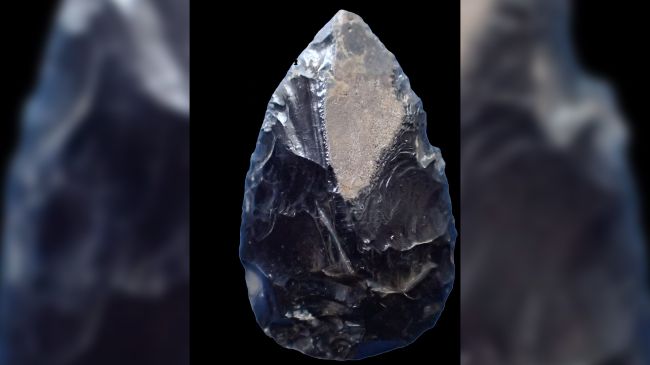 Surprisingly, carbon dating revealed the earliest artifacts at the site dated sometime between 47,000 and 31,000 years ago. As such, this rock shelter was active during the last glacial period, colloquially often called the last ice age, when vast ice sheets reaching up to miles thick covered large portions of the planet.

“At that time, a large part of the Bale Mountains — about 265 square kilometers [100 square miles] was covered by ice,” study co-author Alexander Groos, a glaciologist at the University of Bern in Switzerland, told Live Science. “Glaciers were flowing from a central ice cap down into the valleys.”

These findings are the earliest evidence of prehistoric humans residing at high altitudes, the researchers said.

Although the last ice age might not seem like the best time to reside in mountains that can already get quite cold, the scientists noted melting water at the edges of the glaciers may have made the ice-free plateaus more attractive than the lower valleys, which were warmer but more dry.

In addition, giant mole rats weighing about 4.4 lbs. (2 kilograms) were plentiful in that area and easy to hunt, providing meat to help those humans survive in the rough terrain, the researchers said. Furthermore, nearby deposits of volcanic obsidian rock would have supplied the raw materials for valuable tools. “The settlement was therefore not only comparatively habitable, but also practical,” Glaser said in a statement.

Instead of serving as a permanent settlement, this rock shelter likely functioned as a base camp for weeks to months at a time, “where large groups — 20 to 25 people — slept, prepared food, manufactured tools, imported resources, and so on,” Ossendorf said. “Prehistoric humans at that time were mobile hunter-gatherers, so they never stayed sedentary at a single site, but had a scheduled ‘subsistence circuit.'”

Starting about 10,000 years ago, the location was inhabited a second time and increasingly used as a hearth. Moreover, “for the first time, the soil layer dating from this period also contains the excrement of grazing animals,” Glaser said in the statement.

These findings shed light on the potential humans have to adapt to changes in their surroundings, the researchers said. For example, some groups of people living in the Ethiopian mountains today can easily live with low levels of oxygen in the air.

The scientists detailed their findings in the Aug. 9 issue of the journal Science.

Click Livescience to read the full story published on 9 August 2019.

The Ethiopian Gender Learning Forum (EGLF) held first annual meeting on April 16, 2021 virtually. The main objectives of the annual meeting was to formalize and operationalize the forum by approving the draft statute, appointing Board members and approving annual work plan of the forum. The Ethiopian Gender Learning Forum evolved from a dialogue that […]